Nothing is pretty anymore

for the cities have to settle some sort of score!

The atmosphere everywhere is nihilist and caustic

stuck in a dystopian vortex!

Every city has a Student population

which contributes heavily to Microsoft Corporation!

where London is Irish

And young men express their resentment towards University Flankers

by saying, “Youse are all fucking Wankers!”

where there’s no innocence anymore!

and a well-done-up City Centre arousing!

Liverpool’s no longer about the Tavern

And Blokes after Strippers

looking to watch the next Bellew fight!

But where’s Belfast in all of this?

Going down the same road?

We have our problems

but we need to put things in perspective!

Hopefully there won’t be a driective

that would make our way of life ineffective!

Compared to one hundred miles away

Hope and pray we keep our identity

to avoid a cultural Hell!

On Monday I was preparing to head on Tuesday morning to Dublin for a graphic design Meetup whenever I received an email for a cloud technology academy in Belfast inviting me to attend an introductory presentation on Wednesday evening and a job interview on Thursday morning. However I managed to attend all three as I then booked a night at the Hotel where the introductory session was held after coming back from Dublin. It was almost divine intervention that I went to Dublin and back from the Aircoach bus between Glengall Street and O’Connell Street.

My employment advisor came with me to the interview yesterday and said that I did really well given the circumstances. I was given a real time problem to solve. I solved it, but only through trial and error. They used an Excel function I didn’t know about. It’s all up to the Gods now.

Now today I have an appointment with my occupational therapist then plan to drive to Cullybackey to get a train to Portrush to relax on the beach; the Irish Open (Golf) is on this weekend, but I’m not interested. 🙂

Yesterday I got a bus from Cookstown to Dublin to head to Killiney for a walk organised by a Meetup group; see previous blog post of my experience in Haiku form. And, having experienced Dublin yesterday, our problems here in Northern Ireland are a drop in the Ocean compared to what’s going on down South.

First of all, there is an ongoing industrial dispute between the Government and Public Transport workers. The DART drivers were on strike on Friday, but at least they were in operation yesterday, so I could get to Killiney without needing a taxi. Though Dublin Bus services were also in operation. The Unions are holding the city to ransom. The money is no longer there to satisfy every whim in the land. There isn’t much reported on how Unions in America bankrupted Detroit. 🙂

Resentment aside, I was at Killiney DART station and there is a Café there run by a Dutch woman who is extremely friendly and well known. I had a cup of tea there and it was an experience witnessing the abundance in the area.

Then came the walk. It was meant to be for two and a half hours, but I only lasted half an hour. I’m THAT unfit. Plus I paid the price for being dehydrated yesterday this morning with the runs. (too much information) We passed through Bono’s house; how fitting since I had bordering vertigo looking down at the scenery from the station. My brother has worse vertigo than me, though. But he now works for M&S. :p

I did manage to walk to Dalkey to get the DART back to Connolly Station and I noticed the flags and bunting for Cuala, the club that won the All-Ireland Club Hurling title on St. Patrick’s Day. They beat Slaughtniel in the semi the afternoon I had planned to go to Belfast for a Meetup. It was good to know things I should have known much earlier.

Then when I got the bus back to Cookstown there was a huge backlog due the the numbers looking a bus from Dublin Airport. One guy wanted to pay for a ticket to Armagh by card, only to be told ‘cash only’. But there was one guy at the Airport who wanted to head to Castleblaney, County Monaghan, to go fishing. His day was ruined. Puts things into perspective for me.

Now I feel that I have to cut back on the excursions and focus on finding work. I’m spreading myself too thin now. 😐

Multipack of crisps!
Bought in a Dungannon shop!
Some for homeless guy!

DART to Killiney!
Forgot my cappuccino!
A bit throughother!

Scenery outside!
Beautiful beach and seaside!
Don’t get light headed!

Gypsy bloke outside!
Threw down his fleece in anger!
Back for cigarettes!

Got a cup of tea!
Waiting for the Meetup walk!
Up Killiney’s hills!

Meetup walking group!
Lasted just half an hour!
I’m that unfit, me!

Walked on to Dalkey!
Eventually found DART!
Back to Connolly!

Need to get a feed!
Went to bar across the road!
No WiFi working!

The bar owners there!
A young Lesbian couple!
American twangs!

Bus back to Cookstown!
Met mum of an old school friend!
Now in Donegal!

Bloke tried to use card!
Bus payment by cash only!
Mine was bought online!

Back to Cookstown now!
Getting car to drive back home!
It was a rough day!

I went to see Mike Garry headlining a poetry gig from 11:30 am to 1:15 pm at the Black Box in Belfast and got to immerse myself in eclectic poetry from him and the support acts.

I braved the elements this morning, exaggeration, to get the bus to Belfast from Castledawson park-and-ride; which should be my home address. 🙂 Then after I got back I got groceries at Lidl. Chop wood, carry water. 🙂

I found out about the Red Pill Studio and wonder how I can contact them without resorting to either Twitter or Facebook. Every time you log onto one of those two sites, God kills a Calf! Someone think of the Calves! 🙂

Arsenal won again, after eight minutes of injury time and getting a penalty at the end. Jaysus, talk about skating on thin ice.

One of the support acts was a quintessential Millennial originally from a Scumbag area of Dublin, but now a budding Actress living in London. (imagine Buffy with a Flat Dublin Accent) I mentioned seeing Mike support John Cooper Clarke at Dun Laoghaire last May and about the bus that goes from Tallaght to Dun Laoghaire. The number 75.

Just a little plug for Mike Garry; his EP ‘St. Anthony – a tribute to Anthony H. Wilson’ is available on iTunes.

Last Tuesday I visited Dublin; driving to Maghera park-and-ride and then taking the X4 to Busaras and then returning during the witching hours of Wednesday morning and driving back. At first I wanted to attend a Meetup for Creatives, however it was cancelled and I decided to arrange a visit with my ex-Landlady in order to ensure I didn’t waste the ticket.

My experience of Dublin underlines the huge changes it has experienced, with the Luas and Cycle Lanes. Though I was told London is worse for cycle lanes. I tried to jay walk to get to Connolly Train Station, to get a DART to Howth Junction, but just about live to tell the tale. The red man never turned green, EVER. We’re just plebs in Dublin. 😦

My ex-Landlady made dinner for me, her husband, herself and her grandson she was looking after. Chicken, spuds and broccoli. Lovely Jubbly.

Then on the way back I noticed kids wearing memorial Gaelic Football Jerseys that I have in Adult form. Turned out the family were from Ballinderry and were getting off the same bus I was getting at Cookstown. But we had to wait outside for the bus after Busaras closed at 11 pm; our bus left Dublin at Midnight. But we were able to board about 20 minutes later.

But I had to take it easy today. I worked yesterday and was exhausted afterwards, didn’t fully recover from the trip.

But I’m so glad that I went.

Toilet training a Puppy: (leaves little to the imagination) 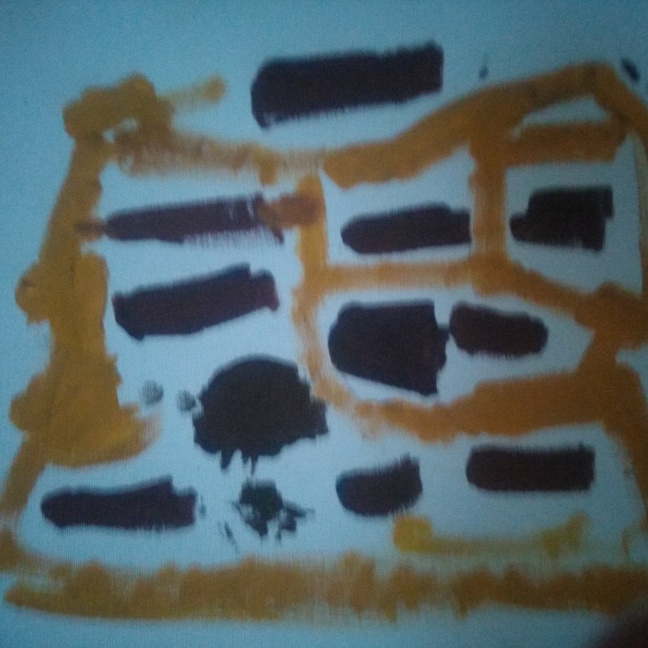